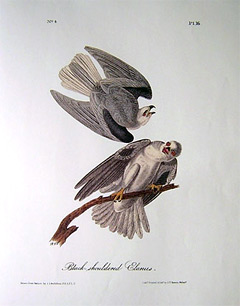 This hand-colored lithograph is Plate #16 from the Octavo Edition of Birds of America – created from 1840 to 1844.

“I have traced the migration of this beautiful Hawk from the Texas as far east as the mouth of the Santee River in South Carolina. CHARLES BONAPARTE first introduced it into our Fauna, on the authority of a specimen procured in East Florida by TITIAN PEALE, Esq., of Philadelphia, who it seems had some difficulty in obtaining it. On the 8th of February, 1834, I received one of these birds alive from Dr. RAVENEL, of Charleston, who had kept it in his yard for eight days previously, without being able to induce it to take any food. The beauty of its large eyes struck me at once, and I immediately made a drawing of the bird, which was the first I had ever seen alive. It proved to be a male, and was in beautiful plumage. Dr. RAVENEL told me that it walked about his yard with tolerable ease, although one of its wings had been injured. On the 23d of the same month I received another fine specimen, a female, from FRANCIS LEE, Esq., who had procured it on his plantation, forty miles west of Charleston, and with it the following note. “When first observed, it was perched on a tree in an erect posture. I saw at once that it was one of the birds which you had desired me to procure for you, and went to the house for my gun. On returning I saw the Hawk very high in the air, sailing beautifully over a large wet meadow, where many Common Snipes were feeding. It would now and then poise itself for a while, in the manner of our Little Sparrow Hawk, and suddenly closing its wings plunge towards its prey with great velocity, making a rumbling noise as it passed through the air. Now and then, when about half way, it suddenly checked its descent, recommenced hovering, and at last marking its prey, rushed upon it and secured it. Its cries, on being wounded, so much resembled those of the Mississippi Kite, that I thought, as I was going to pick it up, that I had only got one of that species. It was so shy that I was obliged to get on horseback before I could approach it within gun shot.”
Mr. H. WARD, who accompanied me on my expedition to the Floridas, found this species breeding on the plantation of ALEXANDER MAYZCK, Esq., on the Santee River, early in the month of March, and shot three, two of which, a male and a female, are now in my possession. Their nests were placed on low trees near the margins of the river, and resembled those of the American Crow, but had none of the substantial lining of that bird’s nest. Mr. WARD states, that at this time they were seen flying over the cane brakes in pursuit of large insects, somewhat in the manner of the Mississippi Kite, and that they were very shy.

My friend JOHN BACHMAN has seen this species fly in groups, at a very great height, in the beginning of March, and thinks that it is only of late years that they have located themselves in South Carolina, where, however, five of them have been procured in one year.

The Black-shouldered Hawk appears to give a decided preference to low lands, not distant from the shores of the Atlantic. On oar way toward the Texas, several of these birds were seen over the large marshes, flying at a small elevation, and coursing in search of prey, much in the manner of the Hen-harrier or Marsh Hawk, but all evidently bent on proceeding to the eastward. Whether this species winters there or not, I am unable to say, but that some remain all the year in Florida, and even in South Carolina, I am quite confident.

The difference between the food of this species and that of the Mississippi Kite is surprising to me. I have never seen the latter seize any bird, whereas the Black-shouldered Hawk certainly does so, as in the stomachs of two individuals which I examined were remains of birds as well as of coleopterous insects. These two birds agree nearly with the description of the one procured by Mr. TITIAN PEALE, excepting in the length of the wings, which in them and in several others that have come under my notice, have their tips fully an inch shorter than the end of the tail. A breeding female differed from the rest in having the eyes dull yellowish-red; the tail-feathers had all been ash-grey, all the primaries were edged with white, and many of the secondaries were still of a light brownish-grey; the black spots under the wings were smaller than usual; the abdomen was also tinged with brownish-grey. I am therefore of opinion, that these birds undergo as many changes of plumage as the Mississippi Kite.

Wings very long and pointed, the second quill longest, the third nearly as long, the first longer than the fourth; the first, second, and third with the outer web attenuated toward the end; the first and second with the inner web sinuated; secondaries very broad, rounded, the inner web exceeding the outer. Tail of twelve feathers, of moderate breadth, long, emarginate and rounded, the middle and lateral feathers being about equal, and eight-twelfths of an inch shorter than the second feather from the side.

Bill black; the cere and soft basal margins yellow. Iris bright red. Tarsi and toes yellow, of a darker tint than the cere; claws black. All the lower parts are pure white, with the exception of a patch on five or six of the larger wing-coverts; the forehead is also white, as are the cheeks; the superciliary bristles black, the white of the head gradually blends into the general colour of the upper parts, which is ash-grey; the smaller wing-coverts bluish-black; the shafts of the quills brownish-black; all the feathers of the tail, excepting the two middle, white; the shafts of the two middle feathers blackish-brown, of the rest white towards the end, the whole of that of the outer pure white.

The female is rather larger than the male, but in other respects similar.

The young when fledged have the bill and claws black, the cere and feet dull yellow; the upper parts brownish-grey, the scapulars and quills tipped with white, the former also margined with yellowish-brown; the primary and secondary coverts are also tipped with white; the smaller wing-coverts are brownish-black; the outer webs of all the tail-feathers are more or less brownish-grey toward the end. The lower parts are white, the feathers on the breast tinged with brownish-yellow at the end, and with the shaft yellowish-brown. The lower wing-coverts are all white. “