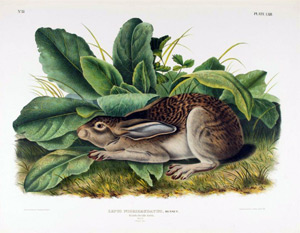 Audubon is widely known and appreciated for his work with birds. But he also produced an ambitious and worthy folio of mammals. This edition was also reproduced in the smaller octavo size.

Known as the Imperial Folio Quadrupeds, this edition was created using lithography. Coloring was done by a Philadelphia lithographer named J.T Bowen.

This paper is not watermarked.

Documentation on the number of editions is not entirely clear. The first printing of full sized Double Elephant prints was 303 sets of 150 images, all sold by subscription. Later, in 1865 a second edition was created but the numbers produced is not known.