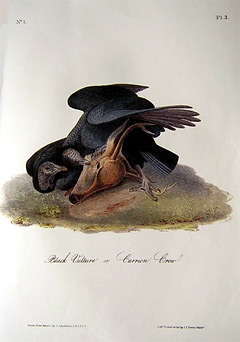 This hand-colored lithograph is Plate #3 from the Octavo Edition of Birds of America – created from 1840 to 1844.

“This bird is a constant resident in all our southern States, extends far up the Mississippi, and continues the whole year in Kentucky, Indiana, Illinois, and even in the State of Ohio as far as Cincinnati. Along the Atlantic coast it is, I believe, rarely seen farther east than Maryland. It seems to give a preference to maritime districts, or the neighbourbood of water. Although shy in the woods, it is half domesticated in and about our cities and villages, where it finds food without the necessity of using much exertion. Charleston, Savannah, New Orleans, Natchez, and other cities, are amply provided with these birds, which may be seen flying or walking about the streets the whole day in groups. They also regularly attend the markets and shambles, to pick up the pieces of flesh thrown away by the butchers, and, when an opportunity occurs, leap from one bench to another, for the purpose of helping themselves. Hundreds of them are usually found, at all hours of the day, about the slaughterhouses, which are their favourite resort. They alight on the roofs and chimney-tops, wherever these are not guarded by spikes or pieces of glass, which, however, they frequently are, for the purpose of preventing the contamination by their ordure of the rain water, which the inhabitants of the southern States collect in tanks, or cisterns, for domestic use. They follow the carts loaded with offal or dead animals to the places in the suburbs where these are deposited, and wait the skinning of a cow or horse, when in a few hours they devour its flesh, in the company of the dogs, which are also accustomed to frequent such places. On these occasions they fight with each other, leap about and tug in all the hurry and confusion imaginable, uttering a harsh sort of hiss or runt, which may be heard at a distance of several hundred yards. Should eagles make their appearance at such a juncture, the Carrion Crows retire, and patiently wait until their betters are satisfied, but they pay little regard to the dogs. When satiated, they rise together, should the weather be fair mount high in the air, and perform various evolutions, flying in large circles, alternately plunging and rising, until they at length move off in a straight direction, or alight on the dead branches of trees, where they spread out their wings and tail to the sun or the breeze. In cold and wet weather they assemble round the chimney-tops, to receive the warmth imparted by the smoke. I never heard of their disgorging their food on such occasions, that being never done unless when they are feeding their young, or when suddenly alarmed or caught. In that case, they throw up the contents of their stomach with wonderful quickness and power.
The Carrion Crows of Charleston resort at night to a swampy wood across the Ashley river, about two miles from the city. I visited this roosting place in company with my friend JOHN BACHMAN, approaching it by a close thicket of undergrowth, tangled with vines and briars. When nearly under the trees on which the birds were roosted, we found the ground destitute of vegetation, and covered with ordure and feathers, mixed with the broken branches of the trees. The stench was horrible. The trees were completely covered with birds, from the trunk to the very tips of the branches. They were quite unconcerned; but, having determined to send them the contents of our guns, and firing at the same instant, we saw most of them fly off, hissing, grunting, disgorging, and looking down on their dead companions as if desirous of devouring them. We kept up a brisk fusilade for several minutes, when they all flew off to a great distance high in the air; but as we retired, we observed them gradually descending and settling on the same trees. The piece of ground was about two acres in extent, and the number of Vultures we estimated at several thousands. During very wet weather, they not unfrequently remain the whole day on the roost; but when it is fine, they reach the city every morning by the first glimpse of day.

The flight of this species, although laboured, is powerful and protracted. Before rising from the ground they are obliged to take several leaps, which they do in an awkward sidelong manner. Their flight is continued by flappings, repeated eight or ten times, alternating with sailings of from thirty to fifty yards. The wings are disposed at right angles to the body, and the feet protrude beyond the tail, so as to be easily seen. In calm weather they may be heard passing over you at the height of forty or fifty yards, so great is the force with which they beat the air. When about to alight, they allow their legs to dangle beneath, the better to enable them to alight.

They feed on all sorts of flesh, fresh or putrid, whether of quadrupeds or birds, as well as on fish. I saw a great number of them eating a dead shark near the wharf at St. Augustine in East Florida; and I observed them many times devouring young cormorants and herons in the nest, on the keys bordering that peninsula.

The Carrion Crow and Turkey-Buzzard possess great power of recollection, so as to recognise at a great distance a person who has shot at them, and even the horse on which he rides. On several occasions I have observed that they would fly off at my approach, after I had trapped several, when they took no notice of other individuals; and they avoided my horse in the pastures, after I had made use of him to approach and shoot them.

At the commencement of the love season, which is about the beginning of February, the gesticulation and parade of the males are extremely ludicrous. They first strut somewhat in the manner of the Turkey Cock, then open their wings, and, as they approach the female, lower their head, its wrinkled skin becoming, loosened, so as entirely to cover the bill, and emit a puffing sound, which is by no means musical. When these actions have been repeated five or six times, and the conjugal compact sealed, the “happy pair” fly off, and remain together until their young come abroad. These birds form no nest, and consequently never breed on trees; the hollow of a prostrate log, or the excavation of a bank of earth, suffices for them. They never lay more than two eggs, which are deposited on the bare ground; they are about three inches in length, rather pointed at the smaller end, thick in the shell, with a pure white ground, marked towards the greater ends with large irregular dashes of black and dark brown. Twenty-one days are required for hatching them. The male and female sit by turns, and feed each other. The young are at first covered with a light cream-coloured down, and have an extremely uncouth appearance. They are fed by regurgitation, almost in the same manner as pigeons, and are abundantly supplied with food. When fledged, which is commonly about the beginning of June, they follow their parents through the woods. At this period, their head is covered with feathers to the very mandibles. The plumage of this part gradually disappears, and the skin becomes wrinkled; but they are not in full plumage till the second year. During the breeding season, they frequent the cities less, those remaining at that time being barren birds, of which there appear to be a good number. I believe that the individuals which are no longer capable of breeding, spend all their time in and about the cities, and roost on the roofs and chimneys. They go out, in company with the Turkey-Buzzards, to the yards of the hospitals and asylums, to feed on the remains of the provisions cooked there, which are as regularly thrown out to them.

I have represented a pair of Carrion Crows or Black Vultures in full plumage, engaged with the head of our Common Deer, the Cervus virginianus.

Adult Male. Bill elongated, rather stout, straight at the base, slightly compressed; the upper mandible covered to the middle by the cere, broad, curved, and acute at the end, the edge doubly undulated. Nostrils medial, approximate, linear, pervious. Head elongated, neck longish, body robust. Feet strong; tarsus roundish, covered with small rhomboidal scales; toes scutellate above, the middle one much longer, the lateral nearly equal, second and third united at the base by a web. Claws arched, strong, rather obtuse.

Plumage rather compact, with ordinary lustre. The head and upper part of the neck are destitute of feathers, having a black, rugose, carunculated skin, sparsely covered with short hairs, and downy behind. Wings ample, long, the first quill rather short, third and fourth longest. Tail longish, even, or very slightly emarginated at the end, of twelve broad, straight feathers.

Bill greyish-yellow at the end, dusky at the base, as is the corrugated skin of the head and neck. Iris reddish-brown. Feet yellowish-grey; claws black. The general colour of the plumage is dull-black, slightly glossed with blue; the primary quills light brownish on the inside.

Adult Female. The female resembles the male in external appearance, and is rather less.”