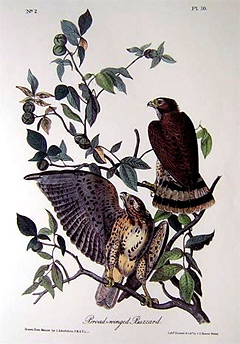 This hand-colored lithograph is Plate #10 from the Octavo Edition of Birds of America – created from 1840 to 1844.

“One fine May morning, when nature seemed to be enchanted at the sight of her own great works, when the pearly dew-drops were yet hanging at the point of each leaf, or lay nursed in the blossoms, gently rocked, as it were, by the soft breeze of early summer, I took my gun, and, accompanied by my excellent brother-in-law, WILLIAM G. BAKEWELL, Esq., at that time a youth, walked towards some lovely groves, where many songsters attracted our attention by their joyous melodies. The woods were all alive with the richest variety, and, divided in choice, we kept going on without shooting at any thing, so great was our admiration of every bird that presented itself to our view. As we crossed a narrow skirt of wood, my young companion spied a nest on a tree of moderate height, and, as my eye reached it, we both perceived that the parent bird was sitting in it. Some little consultation took place, as neither of us could determine whether it was a Crow’s or a Hawk’s nest, and it was resolved that my young friend should climb the tree, and bring down one of the eggs. On reaching the nest, he said the bird, which still remained quiet, was a Hawk and unable to fly. I desired him to cover it with his handkerchief, try to secure it, and bring it down, together with the eggs. All this was accomplished without the least difficulty. I looked at it with indescribable pleasure, as I saw it was new to me, and then felt vexed that it was not of a more spirited nature, as it had neither defended its eggs nor itself. It lay quietly in the handkerchief, and I carried it home to my father-in-law’s, shewed it to the family, and went to my room, where I instantly began drawing it. The drawing which I then made is at this moment before me, and is dated “Fatland Ford, Pennsylvania, May 27, 1812.”
I put the bird on a stick made fast to my table. It merely moved its feet to grasp the stick, and stood erect, but raised its feathers, and drew in its neck on its shoulders. I passed my hand over it, to smooth the feathers by gentle pressure. It moved not. The plumage remained as I wished it. Its eye, directed towards mine, appeared truly sorrowful. I measured the length of its bill with the compass, began my outlines, continued measuring part after part as I went on, and finished the drawing, without the bird ever moving once. My wife sat at my side, reading to me at intervals, but our conversation had frequent reference to the singularity of the incident. The drawing being finished, I raised the window, laid hold of the poor bird, and launched it into the air, where it sailed off until out of my sight, without uttering a single cry, or deviating from its course. The drawing from which the Plate is taken, was subsequently made, as I had to wait until I should procure a male, to render it complete.

The Broad-winged Hawk is seldom seen in Louisiana, and I believe never except during the severe winters that occasionally occur in our Middle and Eastern Districts. I have observed that its usual range seldom extends far west of the Alleghany Mountains; but in Virginia, Maryland, and all the States to the eastward of these, it is by no means a rare species. I have shot several in the Jerseys, the State of New York, near the Falls of Niagara, and also in the Great Pine Forest.

Its flight, which is easy and light, is performed in circles. When elevated in the air, it is fond of partially closing its wings for a moment, and thus gliding to a short distance, as if for amusement. It seldom chases other birds of prey, but is itself frequently teased by the Little Sparrow-hawk, the King-bird, or the Martin. It generally attacks birds of weak nature, particularly very young chickens and ducklings, and during winter feeds on insects, and other small animals. It flies singly, unless during the breeding season, and after feeding retires to the top of some small tree, within the woods, where it rests for hours together. It is easily approached. When wounded by a shot so as to be unable to fly, it, like most birds of its tribe, throws itself on its back, opens its bill, protrudes its tongue, utters a hissing sound, erects the top-feathers of its head, and defends itself by reiterated attempts to lay hold with its talons. If a stick is presented to it in this state, it will clench it at once, and allow itself to be carried hanging to it for some distance, indeed until the muscles become paralyzed, when it drops, and again employs the same means of defence.

When feeding, it generally holds its prey with both feet, and tears and swallows the parts without much plucking. I must here remark, that birds of prey never cover their victims by extending the wings over them, unless when about to be attacked by other birds or animals, that evince a desire to share with them or carry off the fruit of their exertions. In the stomach of this bird I have found wood-frogs, portions of small snakes, together with feathers, and the hair of several small species of quadrupeds. I do not think it ever secures birds on the wing, at least I never saw it do so.

The nest, which is about the size of that of the Common Crow, is usually placed on pretty large branches, and near the stem or trunk of the tree. It is composed externally of dry sticks and briars, internally of numerous small roots, and is lined with the large feathers of the Common Fowl and other birds. The eggs are four or five, of a dull greyish-white, blotched with dark brown. They are deposited as early as the beginning of March, in low places, but not until a fortnight later in the mountainous parts of the districts in which the bird more frequently breeds.

Bill shortish, as broad as long, the sides convex, the dorsal outline convex from the base; upper mandible with the edges slightly inflected, waved with a broad rounded lobe, the tip trigonal, descending obliquely, acute; lower mandible inflected at the edges, rounded at the tip. Nostrils oval, oblique. Head rather large, flattened above. Neck shortish. Body ovate, broad anteriorly. Wings rather long. Legs longish, rather robust, roundish; tarsi covered before and behind with scutella; toes covered above with scutella, scabrous and tuberculate beneath; middle toe much the longest, outer connected at the base by a membrane, and shorter than the inner; claws long, curved, roundish, very acute.

Plumage ordinary, compact. Feathers of the head narrow, of the back broad and rounded, of the neck oblong. Space between the bill and eye covered with bristly feathers. Wing very broad, the primary quills broad, slightly narrowed toward the end, rounded, the fourth longest, the secondary quills curved inwards, broadly obtuse. Tail longish, nearly even, the feathers rather broad, truncated and rounded.

Bill bluish-black at the tip, blue towards the base; cere and margin yellow. Iris hazel. Feet gamboge-yellow; claws brownish-black. The general colour of the upper parts is dark umber; the forehead with a slight margin of whitish, the quills blackish-brown, the tail with three bands of dark brown, alternating with two whitish bands, and a narrower terminal band of greyish, the tips white. Throat whitish; cheeks reddish-brown, with a dark brown mustachial band; the under parts generally light reddish, marked with guttiform umber spots alon the neck, and sagittiform larger spots of the same colour on the breast and sides. Tibial feathers of the same colour, with numerous smaller spots.

Colouring generally similar to that of the male, lighter above, more tinged with red beneath, where the spots are larger and more irregular.