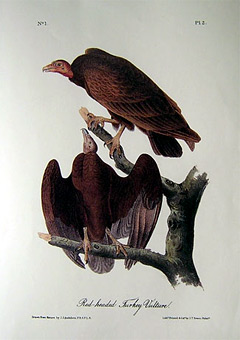 Pictured (right) is John J Audubon’s illustration of the Red-Headed Turkey Vulture, today commonly referred to as the Turkey Vulture.

This hand-colored lithograph is Plate #2 from the Octavo Edition of Birds of America – created from 1840 to 1844.

“This species is far from being known throughout the United States, for it has never been seen farther eastward than the confines of New Jersey. None, I believe, have been observed in New York; and on asking about it in Massachusetts and Maine, I found that, excepting those persons acquainted with our birds generally, none knew it. On my late northern journeys I nowhere saw it. A very few remain and spend the winter in New Jersey and Pennsylvania, where I have seen them only during summer, and where they breed. As we proceed farther south, they become more and more abundant. They are equally attached to maritime districts, and the vicinity of the sea-shore, where they find abundance of food.
The Turkey-Buzzard was found in abundance on the Rocky Mountains and along the Columbia river by LEWIS and CLARK, as well as subsequently by Mr. TOWNSEND, although it is said by Mr. DAVID DOUGLAS to be extremely rare on the north-west coast of America. On the Island of Galveston in Texas, where it is plentiful, we several times found its nest, as usual, on the ground, but on level parts of salt marshes, either under the widespread branches of cactuses, or among tall grass growing beneath low bushes, on which Herons of different species also bred, their young supplying a plentiful store of food for those of the Vultures. The eggs, which never exceed two in number, measure two inches and seven-eighths in length, and one inch and seven and a half eighths in their greatest breadth.

The flight of the Turkey-Buzzard is graceful compared with that of the Black Vulture. It sails admirably either high or low, with its wings spread beyond the horizontal position, and their tips bent upward by the weight of the body. After rising from the ground, which it does at a single spring, it beats its wings only a very few times, to enable it to proceed in its usual way of sailing. Like the Black Vultures, they rise high in the air, and perform large circles, in company with those birds, the Fork-tailed Hawk, Mississippi Kite, and the two species of Crow. The Hawks, however, generally teaze them, and force them off toward the ground.

They are gregarious, feed on all sorts of food, and suck the eggs and devour the young of many species of Heron and other birds. In the Floridas, I have, when shooting, been followed by some of them, to watch the spot where I might deposit my game, which, if not carefully covered, they would devour. They also eat birds of their own species, when they find them dead. They are more elegant in form than the Black Vultures, and walk well on the ground or the roofs of houses. They are daily seen in the streets of the southern cities, along with their relatives, and often roost with them on the same trees. They breed on the ground, or at the bottom of hollow trees and prostrate trunks, and lay only two eggs. These are large, of a light cream-colour, splashed toward the great end with large irregular markings of black and brown. The young somewhat resemble those of the Black Vulture, and take a long time before they can fly. Both species drink water freely, and in doing this immerse their bill to the base, and take a long draught at a time. They both breed at the same period, or nearly so, and raise only one brood in the season.

I have found birds of this species apparently very old, with the upper parts of their mandibles, and the wrinkled skin around their eyes, so diseased as to render them scarcely able to feed amongst others, all of which seldom failed to take advantage of their infirmities. I have represented the adult male in full plumage, along with a young bird, procured in the autumn of its first year. The average weight of a full grown bird is 6 1/2 lbs., about 1 lb. less than that of the Carrion Crow.

In the adult, the head and upper part of the neck are destitute of feathers, having a red wrinkled skin, sparsely covered with short black hair, and downy behind. Feathers of the neck full and rounded concealing the naked crop. Wings ample, long; the first quill rather short, the third and fourth longest. Tail longish, rounded, of twelve broad straight feathers.

Bill at the tip yellowish-white; the cere and the naked part of the head of a tint approaching to blood-red. Iris dark brown. Feet flesh-coloured, tinged with yellow; claws black. The general colour of the plumage is blackish-brown, deepest on the neck and under parts, the wing-coverts broadly margined with brown; the back glossed with brown and greenish tints; the tail purplish-black; the under parts of a sooty brown, on the breast glossed with green.

The olfactory nerve has been ascertained in the mammalia to be the instrument of smell; but in the class of birds, experiments and observations are wanting to determine its precise function, although analogy would lead us to suppose it to be the same in them. So inaccurate have observers been in this matter, that some of them have mistaken the large branch of the fifth pair, which traverses the nasal cavity, for the olfactory nerve. The experiments instituted upon Vultures shew that not only are they not led to their prey by the sense of smell, but also that they are not made sensible by it of the presence of food when in their immediate proximity. Yet, if the olfactory nerve be really the nerve of smell, and if a large expansion of the nasal membrane be indicative of an extension of the faculty, one would necessarily infer that Vultures must possess it in a high degree. On the other hand, however, the organ and the nerves being found to be equally developed in birds, such as Geese and Gallinaceous species, which have never been suspected of being guided by smell when searching for food, it would seem to follow that the precise function of this nerve, and the nasal cavities, has not yet been determined in birds. That the nasal passages must be subservient to some other purpose than that of respiration merely, is evident from their complexity, but what that purpose is, remains to be determined by accurate observations and experiments. “