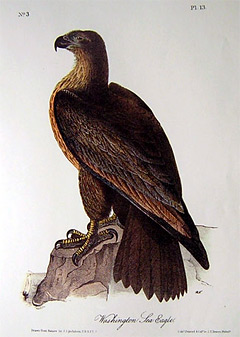 Pictured (right) is John J Audubon’s illustration of the Washington Sea Eagle, today commonly referred to as the Bald Eagle.

This hand-colored lithograph is Plate #13 from the Octavo Edition of Birds of America – created from 1840 to 1844.

“It was in the month of February, 1814, that I obtained the first sight of this noble bird, and never shall I forget the delight which it gave me. Not even HERSCHEL, when he discovered the planet which bears his name, could have experienced more rapturous feelings. We were on a trading voyage, ascending the Upper Mississippi. The keen wintry blasts whistled around us, and the cold from which I suffered had, in a great degree, extinguished the deep interest which, at other seasons, this magnificent river has been wont to awake in me. I lay stretched beside our patroon. The safety of the cargo was forgotten, and the only thing that called my attention was the multitude of ducks, of different species, accompanied by vast flocks of swans, which from time to time passed us. My patroon, a Canadian, had been engaged many years in the fur trade. He was a man of much intelligence, and, perceiving that these birds had engaged my curiosity, seemed anxious to find some new object to divert me. An Eagle flew over us. “How fortunate!” he exclaimed; “this is what I could have wished. Look, sir! the Great Eagle, and the only one I have seen since I left the lakes.” I was instantly on my feet, and having observed it attentively, concluded, as I lost it in the distance, that it was a species quite new to me. My patroon assured me that such birds were indeed rare; that they sometimes followed the hunters, to feed on the entrails of animals which they had killed, when the lakes were frozen over, but that when the lakes were open, they would dive in the daytime after fish, and snatch them up in the manner of the Fishing Hawk; and that they roosted generally on the shelves of the rocks, where they built their nests, of which he had discovered several by the quantity of white dung scattered below.
Convinced that the bird was unknown to naturalists, I felt particularly anxious to learn its habits, and to discover in what particulars it differed from the rest of its genus. My next meeting with this bird was a few years afterwards, whilst engaged in collecting crayfish on one of those flats which border and divide Green river, in Kentucky, near its junction with the Ohio. The river is there bordered by a range of high cliffs, which, for some distance, follow its windings. I observed on the rocks, which, at that place, are nearly perpendicular, a quantity of white ordure, which I attributed to Owls that might have resorted thither. I mentioned the circumstance to my companions, when one of them, who lived within a mile and a half of the place, told me it was from the nest of the Brown Eagle, meaning the White-headed Eagle (Falco leucocephalus) in its immature state. I assured him this could not be, and remarked that neither the old nor the young birds of that. species ever build in such places, but always in trees. Although he could not answer my objection, he stoutly maintained that a Brown Eagle of some kind, above the usual size, had built there; and added that he had espied the nest some days before, and had seen one of the old birds dive and catch a fish. This he thought strange, having, till then, always observed that both Brown Eagles and Bald Eagles procured this kind of food by robbing the Fish-Hawks. He said that if I felt particularly anxious to know what nest it was, I might soon satisfy myself, as the old birds would come and feed their young with fish, for he had seen them do so before.

In high expectation, I seated myself about a hundred yards from the foot of the rock. Never did time pass more slowly. I could not help betraying the most impatient curiosity, for my hopes whispered it was a Sea-Eagle’s nest. Two long hours had elapsed before the old bird made his appearance, which was announced to us by the loud hissings of the two young ones, which crawled to the extremity of the hole to receive a fine fish. I had a perfect view of this noble bird as he held himself to the edging rock, banging like the Barn, Bank, or Social Swallow, his tail spread, and his wings partly so. I trembled lest a word should escape from my companions. The slightest murmur had been treason from them. They entered into my feelings, and, although little interested, gazed with me. In a few minutes the other parent joined her mate, and from the difference in size (the female of rapacious birds being largest), we knew this to be the mother bird. She also had brought a fish; but, more cautious than her mate, she glanced her quick and piercing eye around, and instantly perceived that her abode had been discovered. She dropped her prey, with a loud shriek communicated the alarm to the male, and, hovering with him over our heads, kept up a growling cry, to intimidate us from our suspected design. This watchful solicitude I have ever found peculiar to the female:–must I be understood to speak only of birds?

The young having concealed themselves, we went and picked up the fish which the mother had let fall. It was a white perch, weighing about 5 1/2 lbs. The upper part of the head was broken in, and the back torn by the talons of the Eagle. We had plainly seen her bearing it in the manner of the Fish Hawk.

This day’s sport being at an end, as we journeyed homewards, we agreed to return the next morning, with the view of obtaining both the old and young birds; but rainy and tempestuous weather setting in, it became necessary to defer the expedition till the third day following, when, with guns and men all in readiness, we reached the rock. Some posted themselves at the foot, others upon it, but in vain. We passed the entire day, without either seeing or hearing an Eagle, the sagacious birds, no doubt, having anticipated an invasion, and removed their young to new quarters.

I come at last to the day which I had so often and so ardently desired. Two years had gone by since the discovery of the nest, in fruitless excursions; but my wishes were no loner to remain ungratified. In returning from the little village of Henderson, to the house of Doctor RANKIN, about a mile distant, I saw an Eagle rise from a small enclosure not a hundred yards before me, where the Doctor had a few days before slaughtered some hogs, and alight upon a low tree branching over the road. I prepared my double-barrelled piece, which I constantly carry, and went slowly and cautiously towards him. Quite fearlessly he awaited my approach, looking upon me with undaunted eye. I fired and he fell. Before I reached him he was dead. With what delight did I survey the magnificent bird! Had the finest salmon ever pleased him as he did me?–Never. I ran and presented him to my friend, with a pride which they alone can feel, who, like me, have devoted themselves from their earliest childhood to such pursuits, and who have derived from them their first pleasures. To others I must seem to “prattle out of fashion.” The Doctor, who was an experienced hunter, examined the bird with much satisfaction, and frankly acknowledged be had never before seen or heard of it.

The name which I have chosen for this new species of Eagle, “The Bird of Washington,” may, by some, be considered as preposterous and unfit; but as it is indisputably the noblest bird of its genus that has yet been discovered in the United States, I trust I shall be allowed to honour it with the name of one yet nobler, who was the saviour of his country, and whose name will ever be dear, to it. To those who may be curious to know my reasons, I can only say, that, as the new world gave me birth and liberty, the great man who ensured its independence is next to my heart. He had a nobility of mind, and a generosity of soul, such as are seldom possessed. He was brave, so is the Eagle; like it, too, he was the terror of his foes; and his fame, extending from pole to pole, resembles the majestic soarings of the mightiest of the feathered tribe. If America has reason to be proud of her Washington, so has she to be proud of her great Eagle.

In the month of January following, I saw a pair of these Eagles flying over the Falls of the Ohio, one in pursuit of the other. The next day I saw them again. The female had relaxed her severity, had laid aside her coyness, and to a favourite tree they continually resorted. I pursued them unsuccessfully for several days, when they forsook the place.

The flight of this bird is very different from that of the White-headed Eagle. The former encircles a greater space, whilst sailing keeps nearer to the land and the surface of the water, and when about to dive for fish falls in a spiral manner, as if with the intention of checking any retreating movement which its prey might attempt, darting upon it only when a few yards distant. The Fish Hawk often does the same. When rising with a fish, the Bird of Washington flies to a considerable distance, forming, in its line of course, a very acute angle with the surface line of the water. My last opportunity of seeing this bird was on the 15th of November, 1821, a few miles above the mouth of the Ohio, when two passed over our boat, moving down the river with a gentle motion. In a letter from a kind relative, Mr. W. BAKEWELL, dated, “Falls of the Ohio, July 1819,” and containing particulars relative to the Swallow-tailed Hawk (Falco furcatus), that gentleman says:– “Yesterday, for the first time, I had an opportunity of viewing one of those magnificent birds which you call the Sea-Eagle, as it passed low over me, whilst fishing. I shall be really glad when I can again have the pleasure of seeing your drawing of it.”